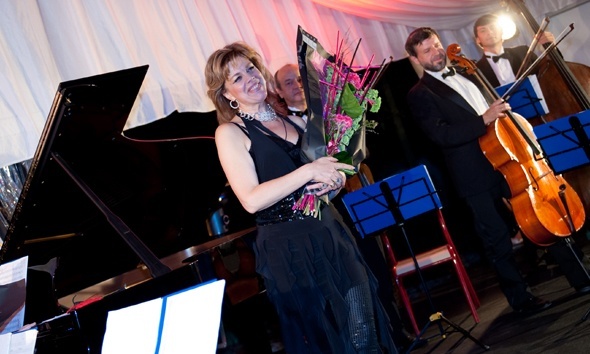 Mutual enrichment of Russian and French cultures was especially bright that evening. This time a megastar came up on the small scene of “Domaine des Broix” – Lubov Kazarnovskaya. Accompanied by musicians of the “Bolshoi Theater” the diva performed some of the well-known operas. But the biggest impression on the French public was made by the performance of Russian romances.

“Opera and vineyards… - a guest is sharing his experience, a known vanguard artist in Cognac. – Modern art is built on such uncommon combinations and interesting points of view. The event is very unusual and strikes the imagination. After the concert I have developed a totally new way of perceiving Russia. I understood that your country is not quite as harsh as I used to think. I saw great depth and tenderness in Russian culture.

Like the culture and art representatives of Cognac region really enjoyed Russian opera, the opera premiere has rated Domain’s cognacs very highly. As a reminder of the evening spent in vine-making domain, The Chairman of the board of directors of group “KIN” has presented an exclusive, nominal carafe of cognac from “Domaine des Broix” to Lubov Kazarnovskaya. The evening after the concert, where guests could exchange judgments from having touched the Russian culture, while enjoying a glass of cognac, has on its’ own left a lot of emotions. Its culmination was the appearance of an air balloon lit from the inside and illuminated by fireworks from the outside, - the symbol of group “KIN”.