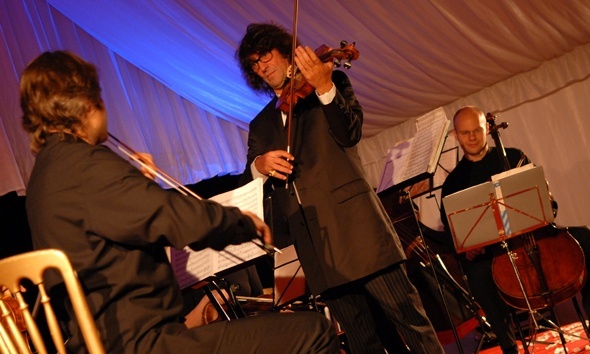 At the age of 25 he has set a goal for himself – to prove that viola is a solo instrument, capable of gathering concert halls and bringing pleasure to the public. The young musician’s first solo concert took place in Paris. Today Uriy Bashmet is the first violist of the world, the head of the best string teams “Moscow Soloists” and “New Russia”. Concert Halls of Europe, USA, Canada, Latin America, Australia, New Zealand and Japan bow before him. Any composition that Bashmet likes, he can turn into a wonderful fairy-tale with a flick of his fiddlestick. Mozart’s viola and Bashmet’s viola were made by the same master – Paolo Testori from Milan – with the difference in three years: Mozart’s was made in 1755 and Bashmet’s – in 1758.

The greatest violist of the world, maestro Uriy Bashmet, surrounded by his group “Moscow Soloists” played a score by the name “XO” in Domaine des Broix especially for the guests of “KIN” on October the 2nd. While in Charente people are used to celebrating the end of vintage with a famous holiday Gerbaude, Domaine des Broix decided to play it differently, making a holiday to celebrate the beginning of vintage, keeping in mind that classical music improves the quality of wine. At the concert among the invited you could see negotiators, experts, business attorneys, financiers, winemakers from the National Interprofessional Bureau of Cognac (BNIC). There also were French partners, the suppliers of goods, employees of Domaine des Broix. In fact, “KIN” invited everyone who we have worked with ever since we arrived in the Cognac region.

Armen Eganyan spoke that evening: “We are businessmen and we are here to make our brand, sell it and so it all comes out well. We don’t play with cognac, we believe in it”. The French press wrote about the event that took place on the 2nd of October: “this evening for VIP guests was very unconstrained at the will of “KIN”. “KIN’s” guests found some kind of winemaking alien ship in the heart of Grand Champagne: illuminated vineyards at night… erected marquee tent. There wasn’t a conglomeration of luxury, on the other hand there was a special Class, in order to celebrate the vintage and the birth of cognacs Vieille Ville XO and Extra and Domaine des Broix l’Oeuvre, which group “KIN” will present on the market in the beginning of 2008.

A concert with sparklers, covering the vineyards… Like a final accord of the violinist to honor the birth of Domaine des Broix cognacs! The scene drowns in petals of white roses… White, like tall walls of the marquee tent, white, like the purity of intentions, with which “KIN” has arrived in Cognac region.